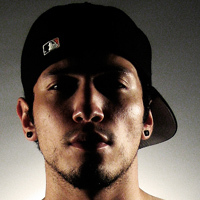 Twenty five, born in Guatemala and raised in Los Angeles. Atomic grew up with urban surroundings, from city life to skate life he gathers all his surroundings and puts them in his art. He first started in the art field in the drawing side. He started drawing since he was in kindergarten.

Since then technology and other elements affected his vision for art. Therefore taking interest in Graphic Design. Now majoring in Graphic Design. Atomic finds himself with a unique sleek but urban style to his work. Later in his studies he encountered photography, starting off with an interest in architecture. He there learned to view objects and people in a perspective view.

Later on he persude other roots of photography from skateboard photography to fashion. His unique use of urban colors and lighting helps him stand out from other artist. His eye for art changes peoples minds. Many have tried to mimic his style and many have influenced for it.

This designer's products are managed by Inkd.  Comments, messages, or questions may receive a response from an Inkd team member.